The following article contains It (2017) spoilers.

I felt like I waited my whole life to see Andrés Muschetti’s 2017 adaption of Stephen King’s legendary It. When the trailer surfaced earlier in the year, the anticipation to relive this childhood nightmare burned inside of me until I sat in the theater Saturday night. Finally, finally this integral part of my cinematic journey was getting the official Hollywood treatment. Seeing It (2017) was more than a fall blockbuster experience, it marked a chapter in my life. But more on that later.

After reigning in my excitement long enough to sit in the theater for 2 hours, I can finally articulate my thoughts on It (2017). I had high expectations for this film; some of them were met and some were not. Being a fan of the story, my connection to this film both worked in its favor and against it. Muschetti really needed to hit the nail on the head with It (2017) for me to be fully satisfied. And, regrettably, not everything was perfect. I intend for this review to be pretty scrutinizing– because the mistakes held back this ridiculously good film from being all-out excellent. Different elements of It (2017) were too little, too much– but some were just right.

This adaption of It (2017) was promised to be a more true-to-novel retelling; one that brought the grotesque elements of King’s work– the ones that were tip-toed around in the ABC miniseries–to the big screen. I will say that the gore aspect of the film was delicious– there was violence that would make King proud. But more crucial aspects of the book were left out to the film’s disadvantage: characterizations of the children were weak or just plain wrong.

Perhaps the most glaring characterization issue of the film was the consistency issues of Mike Hanlon and Ben Hanscom. Their roles in the Loser’s club are, respectively, the black outsider and overweight new kid. In the original story, Ben is the bookworm of the bunch. Through the days he spends at the library, he learns useful information about building dams and defeating monsters. Mike is the historian of the group. His family provides him with horror stories of Derry’s past. He is invaluable in the discovery of Pennywise’s backstory.

The 2017 adaptation affords Ben the roles of bookworm and historian. The only benefit Mike brings to the group is the use of his uncle’s euthanizing gun. He is essentially a supporting character. The only explanation for this near character erasure can be writer’s plans for Chapter II, where Ben and Mike’s roles as adults may change. Still, the shove of the film’s only black character to the background was obvious and unfortunate. Mike was supposed to offer the Losers Club with the overlooked experience of black people in Derry, but he– and the issue of race– were silenced.

Stephen King’s original It carried no semblance of political correctness. Along with racism, the characters faced homophobia, misogyny, anti-semitism, abuse, violence and sexual perversion. Other than one use of the word “f*ggot” and a few innuendos, the Loser’s Club didn’t face much bullying. The shocking scene in which bully Henry Bowers carves an H into Ben Hanscom’s belly should have only been a glimpse at how miserable being a Loser was.

Presently, I can see the ethical hurdles of putting a black child actor in a racially violent scene, or featuring an incestuous rape sequence between Beverly and her father. In order to air on primetime, the ABC miniseries essentially stripped It of its sick and kinky details. So comparatively, It (2017) was able to ‘go there’ with its R-rating. Yet Bill Denbrough’s speech was supposed to be so impaired he cowered at the thought of talking aloud. Stanley Uris was supposed to be mortified about his Jewish identity in the wake of bullies. Overall, Derry wasn’t developed as the American cesspool it was intended to be. In the 2017 adaption, the Losers weren’t that big of losers.

Perhaps I should have known better than to expect a shot-for-shot adaption of King’s cruel and often debauched original novel, but I still anticipated character development that dove further into the hardships of their respective childhoods. Instead, It (2017) presented us with characters that had mass audience appeal.

Die-hard fans aside, the release of It (2017) had a lot riding on it from a Hollywood standpoint. The premiere trailer absolutely crushed viewing records and hype for the film was (understandably) astronomical. It (2017) needed to be not only a critical success, but a commercial one as well. The perfect balance of true-to-King horror and Halloween blockbuster needed to be struck in order for It (2017) to be a winner.

So, without subtracting the horror elements of the film, mass audience appeal had to be achieved through humor. And I must say– It (2017) is a genuinely funny film at moments. I’ll spare you the functionality of comic relief in the horror genre, but the tender moments were sweet, the scary moments were petrifying and the comedic moments were funny– almost too funny.

I was thrilled when Finn Wolfhard of Stranger Things was announced as part of the It (2017) cast. He was to reprise Seth Green’s role of Richie Tozier, the wise-crack of the Losers. He was foul-mouthed and snarky– just like King had built the character. I admit Wolfhard– and other Losers– had me laughing aloud in some scenes, but I noticed some comedy in the film warranted cheap laughter. Believe me, I’ll be the first to laugh at a tasteless dick joke. And I’m fully aware that the immature humor in the film echoed the innocence of the characters. Rather, I felt that jokes were inappropriately placed throughout; a fault of the writers’ and not the actors.

The paramount example of this is the final battle scene between the Losers and Pennywise. After his final breath, Pennywise falls down the well to what the Losers believe to be his death. A sigh of relief circulates through both the children and the audience. Richie then jests he “knows what he’s going to write for his summer essay”. While I heard titters through the audience, I thought to myself, seriously? The deliberate choice to interject unsophisticated humor into moments of intensity rubbed me the wrong way. It is better than that.

In another effort to succeed in the mainstream, It (2017) showed an unexpected amount of CGI– particularly in its horror sequences. Bill Skarsgård delivered a knockout performance as Pennywise; one that gave Tim Curry a run for his money. So much incredible work went into the costume, makeup and character design of the 2017 Pennywise that the CGI additions seemed more like distractions. Skarsgård was so meticulous in his Pennywise portrayal that I trust his lanky, drooly, sinister presence alone would produce the same scares. I can only speculate that major CGI sequences were used as bait in domestic and international box offices.

It’s no secret that these Hollywood tactics worked in the filmmakers’ favor. It (2017) is set to be the most commercially successful movie in the horror genre ever. Films do not reach that status by being niche or experimental. In order for this ambitious project to win, politics of Hollywood filmmaking need to be sprinkled throughout.

And I can be okay with that.

The morning before I went to see the film, I was driving home after dropping off my boyfriend. Main street was particularly quiet and the air crisped with the beginnings of autumn. It was early and I hadn’t had coffee yet, so naturally, bewilderment set in when I saw a red orb bobbing from the storm drain. 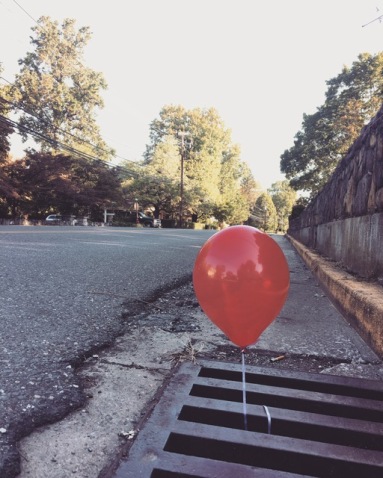 The red-balloon prank became a free and silly marketing strategy for the It (2017) movie. I wasn’t particularly scared when I saw the balloon because I was well aware of the pop culture reference. As I drove past, though, I laughed to myself, almost with sorrow. The red balloon felt like a bittersweet reminder. Then I understood.

Without knowing it, It has been a major part of my life. I still remember the rainy day my friends brought over the It (1990) VHS tapes. At the fragile age of six I screamed at the top of my lungs and hid under my bed at the site of Pennywise. I was petrified of the shower drain for years. After she read the novel years before, my mother’s copy of It sat menacingly on the bookcase at my grandparents’ house. Past the age I learned to read, my feeble curiosity lead me to sneak in pages at a time; learning new dirty words of the Stephen King persuasion and shivering at the horrific descriptions of Pennywise.

I grew older and conquered my fear of clowns, monsters and killers. I began to love horror movies and embrace all the grotesque elements of film a young lady shouldn’t. I roamed my town with my best friends and grew up with them. I got my heart broken and had to face terrifying realities when I was all too young. I’ve since entered adulthood and carried those fond, painful, beautiful memories with me along the way.

Now that It is finally being remade for my generation, I realize what this story is all about. It didn’t matter that It (2017) wasn’t completely perfect or an exact adaptation of the novel. It (2017) managed to emulate that unparalleled nostalgia from my childhood– a priceless reaction I have not experienced from a film in years. This movie was able to do so with breathtaking performances from child actors and my same hunger for real, true horror.

If you haven’t seen It (2017) yet, run, don’t walk to the next showing– because aside from the screams and laughs I shared with friends in the theater, the film’s deeper message will undoubtedly connect with anyone. Exactly 27 years after it’s original release, It is back– and I’ve fallen in love. When I saw that red balloon, I instantly would have given anything to be 13 again with my own band of losers. I believe no one is as brave as they are when they are young.

4 replies to IT Movie Review