The devil may work hard, but Kris Jenner works harder.

Seriously, Keeping Up turned 10 the same week not one– but TWO– sisters garnered major pregnancy rumors. There are no coincidences under Kris’ reign.

And while nothing is confirmed by the family themselves, everywhere from TMZ to People Magazine is reporting, in confidence, that Kylie Jenner and Khloé Kardashian are both pregnant.

The news that Kylie, 20, may be expecting broke over the weekend. She and boyfriend Travis Scott are reportedly due sometime this winter, making the pregnancy a best kept secret among friends. Aside from this news going against all recent flat-tummied selfies, I was completely floored learning this information. Kylie– the bratty, 20-year-old lip kit mogul a mother-to-be? Sounded like tabloid garbage at first glance.

The reports all but horrified my conservative mother, who doubles as my go-to Keeping Up viewing partner. I dumped the news after our appetizer arrived at family dinner, excited to be the bearer of juicy celebrity gossip.

“Whatever happened to marriage!?”

The negative responses my mom gave seem to echo public opinion about Kylie’s pregnancy. Confusion and disapproval are overwhelmingly the public’s reaction on social media. People are saying she’s too young, too immature, too stuck up, too Kardashian to be a mother.

And the thing is– she is. But that’s none of our concern.

Kylie Jenner, whether you’re a fan of her or not, has undoubtedly hustled the social media era. Her influence is certain; young girls want to dress like her, accessorize like her, live like her, augment their bodies like her. I would go so far as to say Kylie Jenner is the youngest-ever outright sex symbol of the modern age. Not a hot young celebrity, not just a sexy marketability. Kylie oozes a raw adult sexuality that is unprecedented by any young mainstream media figure. Men and women alike want a piece of Kylie. Her bank account, as a result, is a reflection of her commodity.

The more her celebrity is made into a spectacle, the more she profits off her sex appeal. The more she is rewarded, the more she provides us, the public, with glimpses of her sex. Magazine covers, calendars, Instagram posts, exclusive footage in the Kylie App. Little by little, we are consuming her sexual presence like a savory meal. We expect– and demand– sexuality from Kylie Jenner.

Here’s where our culture’s misogynistic paradigm comes in. The editorial shoots, makeup campaigns, Snapchat updates– they each give us a taste of our temptation. A while ago, sex tape rumors circulated, alleging an adult tape between Kylie and her ex-boyfriend Tyga was in existence. Kylie quickly denied these rumors, but imagine, for a moment, the ramifications of such a tape’s release. All the media speculation, prying and salivating over Kylie’s plumped lips, breasts, hips and rear end… would be over. The public’s desires would climax with full exposure, ending the trail of breadcrumbs. The sexual tidbits carefully released along the way would no longer be of necessity; the forbidden fruit would have already been plucked. Her sexuality would then become tangible. More tangible than that? The biological evidence of sex: a pregnancy.

In layman’s terms, a pregnancy ruins what Kylie is to us. Her edgy, mysterious and sexy media presence would shatter under the role of mother. What was once possible becomes definite; what was assumed becomes known. In our patriarchal society, we keep female sexuality at arm’s length with desire, but shame women who confirm their sexual behavior by conceiving. Kylie’s gig has always been a game of has she or hasn’t she? Having a baby strips us of that sexual fascination.

Pregnancy is the full biological capability of womanhood, so, in a way, being pregnant ages Kylie. Though she has been heavily accused of growing up too fast, her marketing model is age-old in Hollywood. She’s young enough for a tight body, supple skin and revealing clothing, but just old enough to make the grown men lusting after her comfortable. Girlhood is an added layer of her sexuality. Pregnancy contextually implies the sexual maturity she’s been emulating as reality. The whimsy of unspoken sexual fantasy vanishes with the image of a swelling belly and responsibility of a baby.

On the issue of age– Kylie’s sister Khloé, who is 13 years her senior, might also be expecting. A matter of hours after reports about Kylie debuted, news dropped that Khloé Kardashian and boyfriend Tristan Thompson could also be welcoming their own bundle this winter. I’m sure all of this media frenzy will earn the Kardashian-Jenner publicists a handsome overtime paycheck, because this is tabloid gold. The sisterly competition? Figuring out whose baby will be worth more? The headlines are endless. 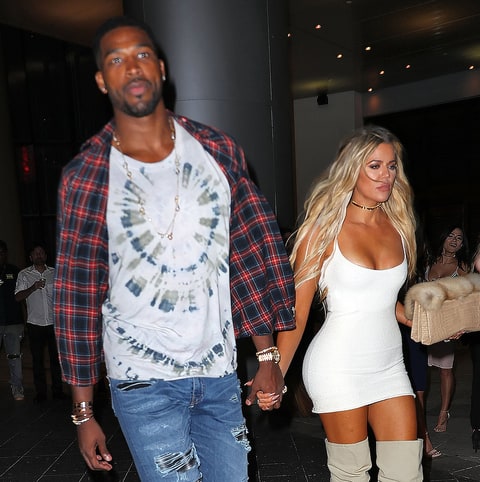 Khloé’s rumors presented themselves as a fizzled afterthought to the explosive Kylie pregnancy buzz. Many felt that, in comparison, Khloé getting pregnant simply was not as shocking. The 33-year-old, down-to-earth member of the family would be more than deserving of motherhood–  right?

Of course the Kardashian-Jenners aren’t the most average example of the female experience; not everyone has a baby fathered by an NBA star or gets driven to OBGYN appointments in Lamborghinis. But the understanding we have of both Kylie Jenner and Khloé Kardashian is exactly the understanding media wants us to have. No matter the time we commit to KUWTK on the DVR, we have no possible way of truly knowing them as women.

The sexist qualifiers we attach to their image– hot, ugly, fat, unmarried, fake, whore– have no virtual impact on their abilities as mothers. The same goes for women in our real lives; we judge the socio-economic status, age and aptitude of pregnant women rather than lift them up in congratulation.

The issue of hungry American women and children is bleak; a reality one in six  individuals must face with their families. At the very least, we know that the Kardashian-Jenner babies-to-be will not face this hardship. Knowing this, the ladies’ romantic relationships, public image and sexuality seem insignificant.

And of course, members of the public may still hail the family as poor role models or trashy social media celebrities. Everyone has an opinion. But to them, I ask: where exactly are your opinions coming from? Are you subscribing to an understanding of pregnancy that only celebrates some women?

If the answer is yes, I have already explained why.

In sum, it is past time we stop shoving women into the binary of either “sexual” or “mother”. We, as a whole, need to start accepting that women have qualities beyond our immediate expectation. It is feasible for a female to be young, spoiled, single, sexually expressive and capable of motherhood. Even Kylie Jenner.

I should offer, once again, that this is entirely based on speculation. Popular rumors are exactly that; I, a lowly college student in Virginia, cannot confirm or deny either Kylie or Khloé’s pregnancy. We don’t know anything momager Kris Jenner doesn’t want us to know. With not so much as a baby bump Snap or quick tweet out, I will not believe anything until I see both Kylie and Khloe with positive pregnancy tests in one hand and today’s newspaper in the other.

Until then, I’ll mind my own.