No thanks to Southwest Virginia’s tedious film distribution, I finally saw I, Tonya last month. I believe my exact words used to describe it post-viewing were “show-stopping”. Craig Gillespie’s I, Tonya was an energetic, raw heap of fun that I would gladly see again.

While I’m familiar with the infamous Nancy Kerrigan incident (me to pop culture is peas to carrots– keep up!), I found the timing of I, Tonya a little strange. In terms of history, we aren’t nearing any sort of anniversary to drive a commemorative angle on its retelling. Generally speaking, Tonya Harding’s life story is a wacky little brick in the wall of American media scandal, overall inconsequential to the course of public media since that time. Understanding her story as one that is contained– though nothing truly is anymore– helped compartmentalize the tale from politics or pandering. Until that one quote…

It was like being abused all over again. Only this time it was by you. All of you. You’re all my attackers too.

Such fictional biting accusations came at an ill-tempered time. In a climate that is so rattled by #MeToo, angry victimhood can be tricky. Tonya Harding isn’t exactly who comes to mind when you think of great media martyrs; Marilyn Monroe and Princess Diana are far more delicate examples, to say the least. But I, Tonya got me thinking about the sheer chaos in Harding’s life surrounding the “incident” and how unnerving it must have been to be tabloid trash first and best female figure skater in the world second.

The 2018 Winter Olympics wrapped up beautifully in PyeongChang, with grand new success stories coming from every country. Time and again I am blown away by the tenacity and athleticism that come from female Olympians, summer or winter. But something about this past Olympic games paired with my incisive view of I, Tonya, I realized, truly, that it is never just about the athlete.

This world loves to make examples out of its women. In the case of athletes, despite the determination, bravery and dedication to their sport, females are made to cower in the media spectacle. The rhetoric involved in the Harding-Kerrigan scandal was inflated to that of national terrorism coverage. This is not to say the ordeal was not a mess nor that Harding was in fact innocent, but it is important to keep watch the ways in which media disparages women frequently in the world of sports, tracing all the way back to that damn police baton. 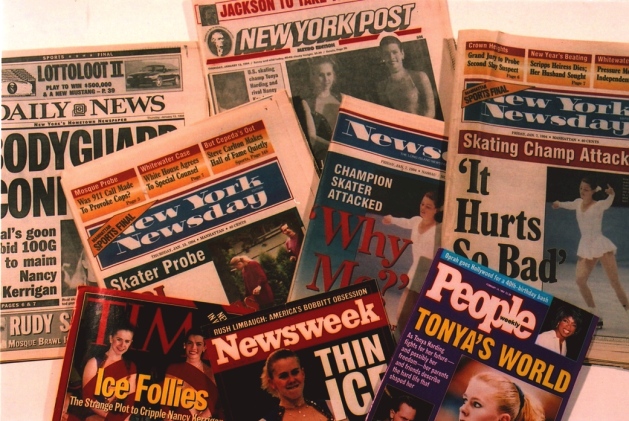 The majority of female sports heroes have faced media scrutiny that should, by all logical reason, be overshadowed by their athletic accomplishment. While we love them for breaking records and earning gold medals, it is simply never enough. Serena Williams, the most decorated tennis player active today (period), has been punished and body shamed in the media throughout her entire career. Even including Williams and Toyna Harding in the same sentence feels ridiculous, considering the caliber and longevity of Serena’s impeccable career. But to put her public image into perspective, one of those individuals was signed to represent the All-American as a Wheaties athlete before a certain knee-capping and the other has never been considered.

This sort of sexism and racism in the media does not stop with Serena Williams. Gabby Douglas, a sweetheart of the 2012 summer Olympic games, returned to Rio four years later to a scathing, flipped media narrative. Her demeanor throughout the competition earned her the nickname “Crabby Gabby”, while social media outlets laid into her for ‘unprofessionalism’ demonstrated in her natural hairstyle. While Douglas, young and ever-inspiring, has held her own against media bullying, female athletes as a whole seem to be held to insurmountable expectation. Unless you’re Ryan Lochte, male athletes need to follow a simple equation to achieve heroism: brawn + success. It’s almost as if the women of sports must prove themselves beyond ability– quite literally in every other aspect– to receive half the recognition and respect.

If no other example is resonating with you, January presented the prosecution of the worst systematic abuser of female athletes in history. Larry Nassar, the physician to the United States Olympic gymnastic team, was sentenced to up to 175 years in prison for the  sexual abuse of over 150 women seeking his medical care. The details of his years as an abuser are devastating, disgusting and, considering the aforementioned obstacles of women in competitive sports, so deeply disappointing. At Nassar’s sentencing, USA gold-medalist Aly Raisman delivered a crucifying personal account of his sexual abuse.

Raisman, radiating true bravery in her court statement, highlighted the most disturbing factor of the entire case. Larry Nassar did not work alone; he was protected by his status as an Olympic doctor and partook in the systematic abuse of young women. I am inexplicably proud of Aly Raisman for this moment, though the picture she paints is staggering and bleak. To think, Raisman and her Team USA sisters trained their hearts out to compete at a global level, only to have their bodies violated by their own healthcare provider. Degraded, misrepresented and abused, they still delivered– becoming the Olympic’s beloved ‘Fierce 5’.

As female athletes rise to their respective challenges, it is hard to determine how deep those challenges run from the surface. While famous male athletes dominate halls of fame everywhere, female athletes take on a much more disposable role in the media. A wardrobe malfunction, a messy home life, a frenemy scandal; this fragmented view allows for women’s objectification through the vignettes of magazine covers and news reels.

I admit how unusual it is for the sardonic humor in I, Tonya to help me reach this conclusion. Typically I look upon athletic women as privileged in able-body and ideal physique. But the theme of battered woman in I, Tonya helped me consider how the toned, talented and driven women of the world may also be disadvantaged. It is with tenacity female athletes win their gold medals and resilience that they fight for the opportunity to win them. Strangely, cheerfully, I, Tonya reminded me the female athlete’s story can be remarkable, impossible, dramatic or even tragic.

But it will never be easy.